Lights and marks are prescribed across the world by the International Association of Lighthouse Authorities (IALA). In 1977 this IALA endorsed two maritime buoyage systems putting an end to the 30 odd systems existing at that time.

Fortunately, the differences between these two systems are few. The most striking peculiarity is the direction of buoyage.

All navaids within IALA are distinguished by:

The standard buoy shapes are cylindrical (can)

Beacons – which are mostly fixed and not floating – have only one elongated and upright shape. The shape of the topmark is essential.

Yet, during the night, we use the features of the AtoN's light to both identify it and ascertain its purpose. There are three features to describe the light:

Mo (U) 8s   “You are steering a dangerous course”, e.g. near offshore installations.

All lighted aids to navigation are either major or minor lights, where major lights are used for key navigational points along sea-coasts, channels and harbour and river entrances: nominal range over 10 NM.

When not included in the chart, important details, such as colour, structure, pedestals, range, elevation, of these major lights can be found in a vital reference called Light List or List of Lights.

Minor lights are found within harbours, along channels and rivers, and these are of low to moderate intensity: nominal range less than 10 NM.
The range of lights on buoys are never indicated on the chart (superbuoys are the exception) or in a light list.
On a clear night – and without background lighting – the maximum range that a lit mark will be seen is about 3 NM, but often less than 1 NM.
Small harbour lights will have a nominal range of 1 – 3 NM.

Below, an excerpt from the PDF  showing the IALA buoyage system:

Strictly, the term “mark” encompasses both beacons ( fixed ) and buoys ( floated ) AtoNs. The latter are far more prevalent; often you can read the term “buoy” as buoy / beacon.

The location of lateral buoys defines the borders of channels, and their characteristics – such as: colour, shape, light, topmark or odd / even number – indicate the direction of channels, traditionally matching the incoming tide, and on a larger scale, clockwise around landmasses.

If numbered, they will be numbered from seaward with higher numbers nearer to the coast / port.
The protocol is that green buoys have odd numbers and red ones have even numbers.

If lit, red buoys have red lights and green buoys have green lights.
Their lights can have any calm phase characteristic except for group flashing FL (2+1), which is specifically reserved for the preferred channel buoys.

These buoys have both red and green colouring, but the main colour is that for the major channel, with the colouring for the minor channel being only a stripe.

The light phase characteristic is FL (2+1) with the light colour from the major channel.

Lateral marks should be of cylindrical and conical shape. However, where they do not rely on a distinctive shape for identification, they should, where practicable, carry the appropriate topmark.

The following non-lateral marks are all identical in both the A and B Regions.

The four configurations of cardinal buoys indicate the safe side of a danger with an approximate bearing. For example, the West cardinal buoy has safe water on its West and the danger on its East side.

Topmark:  two black cones, with tips pointing towards the black band(s) on the body of the buoy (or beacon), for example for a north cardinal mark, the black band is at the top.
As with the isolated danger mark, the topmark is not optional.

Notice the clock face resemblance in light phase characteristics:
3 o'clock is East
6 o'clock is South, plus a long flash
9 o'clock is West.

Isolated danger marks are stationed over dangers with navigable water around them.

These buoys are rarely used in sandy regions, such as The Netherlands or Germany.
A typical hazard that justifies an “isolated danger mark” atop of it, is a solitary rock.
Contrastingly, cardinal buoys will indicate a direction away from the danger, and are often used for dangers covering larger objects or areas, such as a wreck, shoal or reef.

These marks are used to make landfall and will therefore be to seaward of all other (lateral) buoys, guiding you in.
A second use is to signify the middle or deepest section of a channel.

After the sinking of the “Tricolor” in the Pas de Calais (Dover Straits) in 2002, several other vessels hit the wreck despite standard radio warnings, three guard ships and a lighted buoy.

This incident spawned a new type of buoy, the emergency wreck marking buoy, which is placed as close as possible to a new dangerous wreck.

The emergency wreck marking buoy will remain in position until:

If multiple buoys are deployed then the lights will be synchronized.
A racon Morse Code “D” and / or AIS transponder can be used.

Marks used to indicate a special area or feature whose nature may be apparent from reference to a chart or other nautical publication. They are not generally intended to mark channels or obstructions where other marks are more suitable.

Body:  yellow, any shape not conflicting with lateral marks.

Light:  yellow, for instance Fl Y or Fl(4) Y but any rhythm other than those used for white lights on cardinal, isolated danger or safe water marks.

A range consists of two or more fixed navigation marks situated some distance apart and at different elevations. If lighted these are conventionally called leading lights since “range” applies to distances as well (dipping range, luminous range, geographic range, etc.).

The shape and colours of the daymarks and the colours and characters of lights are advertised in the “List of Lights".

A range provides a leading line for navigators. When both marks are in line the observer is on the recommended track (“on range line”).
Consult the charts for the portion of channel serviced by the range. The solid line portion indicates the track to be followed; on land and where the water becomes too shallow a dashed line is drawn. See their chart symbols below.

AtoN symbols in the chart

The seafaring nations of the world – members of the International Hydrographic Organisation – agreed in 1982 on an universal set of chart symbols, abbreviations, colours, etc, in order to obtain uniformity and safety, to be used both in the paper nautical chart and in remodelled form in ECDIS the “Electronic Chart Display Information System”.

Some chart symbols come with a line and circle

indicating the precise location, otherwise use the center of the symbol, or its placeholderplaceholder.

Two distinct types of mark are drawn differently in the chart:

15s   Period: the time taken to exhibit one full sequence of 3 flashes and eclipses: 15 seconds 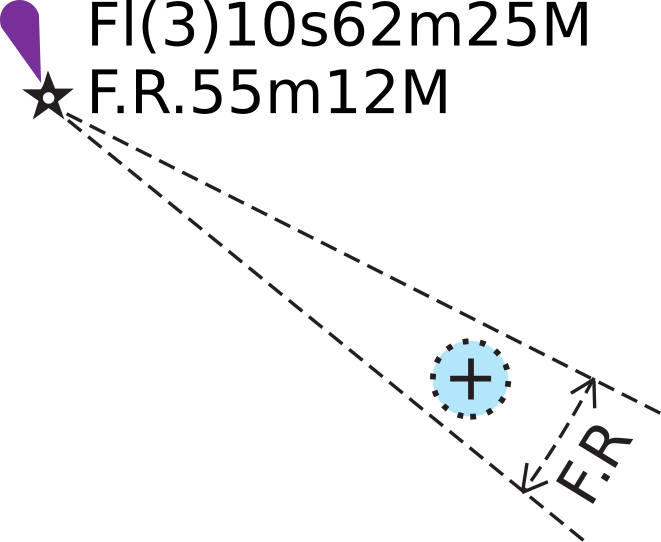 Fl(3) and F.R.   Class of lights: group flashing of three flashes (main light that visible from all directions), no colour is indicated therefore white. Secondly, a subsidiary fixed red sector light directed over a danger 10s   Period: the time taken to exhibit one full sequence of 3 flashes: 10 seconds. Obviously, the fixed light has no period 62m and 55m  Elevation of focal planes above datum: 62 metres for the all-round light, and lower, at 55 metres, the red sector light

When sailing a dangerous course, and within 12 NM, both the white flashing light and the red fixed light will be seen in a vertical line above each other.

Direction (or directional) lights are explained in the Exercises & Answers PDF. These lights a very narrow sector intended to mark a direction to be followed. They are generally used where leading lights cannot be established but serve the same purpose as leading lights.

It is important to know at what distance we may (begin to) see a certain light, and when we can expect to lose sight of it, especially when making landfall. Several practical ranges are used to the describe the visibility of lights in navigation:

The luminous range is the effective nominal range when the atmospheric visibility is not 10 NM.

This diagram gives the approximate range at which a light may be sighted, at night, in the meteorological visibility prevailing at the time of observation

The diagram is entered from the top border, using the nominal range stated in the nautical chart or the “list of lights”.

The numbers along the curves represent the estimated meteorological visibility at the time of observation, and those along the left-hand border the luminous range under those conditions.

Example: consider a light of an intensity of 100 000 candelas, which equals a nominal range of about 20 NM.
When the meteorological visibility is 20 NM, the light could be sighted at about 32 miles (navy-coloured line, 1 arrow), and when 2 NM, at about 6 NM (navy-coloured line, 2 arrows); given a sufficient elevation and height of eye.

As the scale along the top border is based on a meteorological visibility of 10 NM, the luminous ranges in the prevailing conditions obtained from the bold 10 miles curve will be identical to the nominal range started from the top border.

Caution When using this diagram keep in mind that:

A light’s geographic range depends upon the heights of both the light and the observer.

For this purpose the formula can be simplified, and solved without a calculator. Assume an opportune standard height of eye of 4 metres as well as rounding 2.08 down to 2.

Example with a light elevation of 25 metres:

See the geographic range table or use my online calculator.

When comparing the geographic range with the light’s luminous range, then the lesser of the two ranges is the range at which the light will first be sighted: the visible range.

Tide or no Tide…

There will be some judgement involved (luminous range is a rough estimate) resulting in a large margin of error in visible range. Therefore only when light elevation is rather low (<20m), while tidal range is high should it be necessary to include tide.

Because of the limiting factor of the geographic range, most major lights will never be seen from a sailing yacht 20 NM away. Yet, due to atmospheric scattering, it is sometimes possible to take a compass bearing on the loom of the light: its reflection against the clouds. Additionally, it is sometimes even possible to observe a rotating beam of light.

Different coloured lights with equal luminous intensity have different ranges.
White light is the most visible followed by yellow, green and then red.
Therefore, at extreme ranges an “AL WG” can resemble a “Fl W”.

The range of a lighted buoy is never indicated, but on a clear night the maximum range is 3 NM, yet often considerably less.

See the next chapter…