The modern chart shows us positions of many recognizable aids to navigation like churches and lighthouses, which facilitate the approach to a coastal area. This concept originated from a chart by Waghenaer

and proved a milestone in the development of European cartography. This work was called “Spieghel der Zeevaerdt”

and included coastal profiles and tidal information much like the modern chart. It enables us to find the angle between the North and for example an offshore platform, as seen from our position. Taking a bearing on this oil rig with a compass provides us with a compass course or bearing. This course first needs correction for both variation and - according to the deviation card or graph, which tells us the deviation for our current heading - the deviation 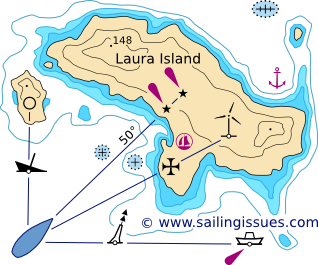 One of these four ranges consists of two lights that are intentionally placed to provide a LOP. These pairs of lights are called range lights or leading lights. In this case they indicate the approach towards the marina and mark the channel between the dangerous rocks along a true course of 50°

. When looking towards any leading lights, the nearest one will be lower

Therefore, in the middle of the channel both lights will appear vertically above each other.

Even when there are no man-made structures available, a range can be found by using natural features such as coastlines and islets. The example on the left shows a yacht that will avoid the dangerous wreck as long as the islets don't overlap.

If two LOPs intersect we can construct a position fix: the ship's position on the earth.
Often however, a triangle occurs when a third LOP is added in the construction. This indicates that there are errors involved in at least one of the bearings taken. In practice, we should consider each LOP as the average bearing in a wider sector of for instance 10°

. The optimum angular spread is 90° (two objects) or 120° (three objects). Moreover, bearings on distant objects bring about more uncertainty in our position fix as the sector widens. Finally, if moving fast you should not put any time between the bearings.

The next example features a nocturnal landfall on Willemsen Island - you are welcome to visit, but mind the rocks. The position fix is plotted by taking bearings at two light-vessels as their lights appear over the horizon

. The variation is -1° and the ship's compass heading is 190°. Since we use our steering compass

for our bearings, we can use the same deviation table. That means a deviation of -4° with which we can calculate (cc + var + dev = tc) the true courses.

Without a third LOP - forming the dreaded triangle - there is the false suggestion of accuracy. Yet, instrument errors, erroneous identification of an aid to navigation, sloppy plotting, etc. can and will cause navigation errors. Therefore, if close to e.g. rocks, you should assume to be at the worst possible position (i.e. closest to the navigational hazard).

It is sometimes impossible to obtain more than one LOP at a time. To determine the ship's position with one aid to navigation we can use a running fix. However if a running fix is not possible, we can determine an estimated position.

An estimated position is based upon whatever incomplete navigational information is available, such as a single LOP, a series of depth measurements correlated to charted depths, or a visual observation of the surroundings.

. This is done by drawing a line from the DR position at the time of the LOP perpendicular to the LOP. An EP is denoted by a square instead of an ellipse.

Do not rely on an EP as much as a fix. The scale of reliability, from best to worst:

is a technique to determine a ship's approximate position by applying to the last established charted position a vector or series of vectors representing true courses and speed. This means that if we have an earlier fix, we plot from that position our course and “distance travelled since then” and deduce our current position. Dead reckoning is crucial since it provides an approximate position in the future. Each time a fix or running fix is plotted, a vector representing the ordered course and speed originate from it. The direction of this course line represents the ship's course, and the length represents the distance one would expect the ship to travel in a given time. This extrapolation is used as a safety precaution: a predicted DR position that will place the ship in water 1 metre deep should raise an eyebrow…
In the example above the true courses are plotted in the chart, and to assist the helmsman these course lines are labelled with the corresponding compass courses.
Guidelines for dead reckoning:

Under some circumstances, such as low visibility, only one line of position can be obtained at a time. In this event, a line of position obtained at an earlier time may be advanced to the time of the later LOP. These two LOPs should not be parallel to each other; remember that the optimal angular spread is 90°. The position obtained is termed a running fix because the ship has “run” a certain distance during the time interval between the two LOPs. To use the LOP obtained at an earlier time, we must advance it to the time of the second LOP. This is done by using the dead reckoning plot. First, we measure the distance between the two DR positions and draw a construction line, which is parallel to a line connecting the two DR positions.
Note that if there are no intervening course changes between the two DR positions, it's easiest just to use the course line itself as the construction line.
Now, using the parallel rulers we advance the first LOP along this construction line over the distance we measured. Et voilá, the intersection is our RFix.
If there is an intervening course change, it appears to make our problem harder. Not so! The only DR positions that matter are the two corresponding with the LOPs.
Guidelines for advancing a LOP:

Like the dead reckoning positioning, the danger bearing is an important tool to keep the ship out of harm's way. 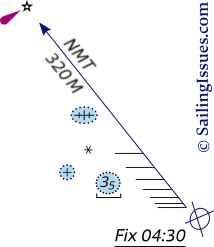 First, the navigator identifies the limits of safe, navigable water and determines a bearing to for instance a major light. This bearing is marked as “No More Than” (NMT) or “No Less Than” (NLT), depending on which side is safe. Hatching is included on the side that is hazardous, along with its compass bearing.

), marked with the magnetic course of 320°, practical for a handheld compass that requires no deviation correction.
Were we see that light at 350° magnetic - which is definitely “More Than” - the rocks and wreck would be between us and the major light. A possible cause could be a (tidal) stream from east to west.

is used instead of a direction, a danger range is plotted much the same way as the danger bearing.

The Turn bearing - like the danger bearing - is constructed in the chart in advance. It should be used as a means of anticipation for sailing out of safe waters (again like the danger bearing and dead reckoning). The turn bearing is taken on an appropriate aid to navigation and is marked “TB”. As you pass the object its bearing will slowly change. When it reaches the turn bearing turn the vessel on her new course.
This type of bearing is also used for selecting an anchorage position or diving position.

- a 16th century mathematician from Leiden, the Netherlands - became famous for inventing the loxodrome and his method of triangulation.
The Snellius construction was first used to obtain the length of the meridian by measuring the distance between two Dutch cities

. He took angles from and to church towers of villages in between to reach his objective. Nowadays we use the Snellius method to derive our position from three bearings without the use of LOPs, and while leaving out deviation and variation, which simplifies things. Also, since only relative angles are needed a sextant can be used to measure navigation aids at greater distances. Closer in a compass can be used.
The construction: 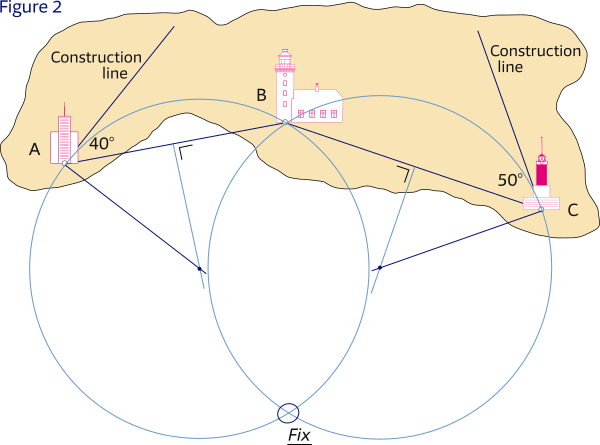 The advantage: deviation and variation can be left out since the angles (here 40° and 50°) are relative ones. Moreover, a sextant can be used to obtain angles between objects at greater distances, that with a compass would be less precise.

Note, that a few countries use an alternative symbol

Plotting should be done with a soft pencil. Moreover, avoid drawing lines through the chart symbols. This is to prevent damage to the chart when you have to erase the construction.

Learn sailing and navigation via yacht charters with instruction in Greece.