The nautical chart is a 2-dimensional representation of a 3-dimensional world. And although this results in various distortions, as long as two requirements are met we can use this image for navigational purposes. To fulfil these demands a nautical chart requires parallels and meridians that are both straight and parallel. Moreover, the meridians will need to be perpendicular to the parallels.
A well known method to create such a chart is called the Mercator projection after Gerard “Mercator” Kremer

, a Flemish scholar who studied in 's Hertogenbosch (the Netherlands) and Leuven (now Belgium) and who invented his famous projection in 1569.

The Mercator chart was designed for sailors and can be constructed by wrapping a cylinder around the planet so that it touches the equator. On this cylinder the surface of the earth is projected and finally the cylinder is cut open to yield the 2-dimensional chart.
But where the meridians converge on the globe they run parallel in the projection (see chart below), indicating the distortion. Look, for example, at a high parallel. The length of such a parallel on the globe is much smaller than the equator. Yet, on the chart they have exactly the same length creating a distortion which gets bigger nearer to the poles. The figure below shows the construction of the Mercator projection. From this it is clear that only the vertical scales should be used for measuring distances.

Click on the world map on the right to see the distortions of a Mercator projection. Each navy coloured circle/ellipse has a radius of 500 km.

The vertical scale depicted on the right demonstrates the distortion. The two little navy coloured markers have precisely the same size, the upper one measures only 0.64 degrees (= 38.4 nm) while the other measures 1.00 degrees (= 60 nm). So, distances (in degrees or in miles and minutes) should not only be read on the vertical scale, but also at approximately the same height.

The horizontal scale is only valid for one latitude in the chart and can therefore only be used for the coordinates (a point, but not a line). If you divide the surface of the earth in eight pieces, and lift one out and project it, you end up with the figure below.

The result is that both A-A' and B-B' are now as long as the bottom of the chart and are “too long”. But there are of course other projections in use by sailors. An important one is the Stereographic projection, which is constructed by projecting on a flat plane instead of a cylinder. On this chart parallels appear as slightly curved and also the meridians converge at high latitudes. So, strictly speaking, a straight course will not appear as a straight line in the chart, but the parallels remain perpendicular to the meridians. Most often, distortions are scarcely noticed when this projection is used to chart a small area. Like the Mercator projection, the vertical scale represents a meridian and should be used for measuring distances.

Another projection is the Gnomeric projection on which the meridians are again converging. But most importantly, the parallels are arcs of a circle while great circles appear as straight lines. On a sphere the shortest route between A and B is not a straight line but an arc (part of a great circle). Though this is also true when you – for example – cross a little bay, we use for simplification a loxodrome (a handy straight line on your Mercator chart which does not reflect your shortest route). On a Gnomeric chart this same loxodrome is an arc, while your shortest route (a great circle) ends up as a straight line. Hence, the gnomeric projection is particularly useful when sailing great circles (like when you dabble in circumnavigation) and is beyond the scope of a coastal navigation course.

Organization of the chart

Information in the chart

A pair of nautical dividers (single handed dividers) is used to obtain precise coordinates from the chart. This device enables you to take the distance between that particular position and the closest grid line. You then place the dividers on the scale with one end on this grid line, leaving the other end precisely at your coordinate. Do this twice to get both latitude and longitude at the scale on the edge of the chart.
Below are some examples. Plotting a position in the chart is done by reversing this method.

Some chart symbols come with a little line and circle 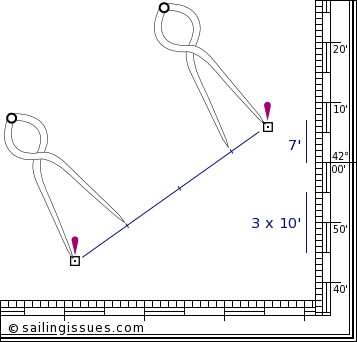 To measure the distance between, for instance, these two oil rigs, we will again need our dividers. Remember, we can only use the vertical scale.

We first take a convenient distance like 10' (10 nautical miles) on the vertical scale using the middle latitude. Then we start walking with the dividers from the southern oil rig to northern one. Finally, we adjust the dividers to measure the small remaining part at its own height, i.e. its own latitude

.
The image shows that the total distance is 37 nautical miles.

© sailingissues.com
So, now we can measure distances and both plot and read out positions, but we also need directions. For example we need to find the course from safe-water buoy A to safe-water buoy B. To accomplish this we may use parallel rules as shown in this chart below: First you line this instrument up with the two buoys. Then follows the intriguing part in moving the device to the compass rose without losing its alignment. Finally, when one of the rules is aligned with the heart of the compass card, you can read course A – B. In this example: 170°.
Besides the parallel rules there are other types of instruments available, notably the Breton plotter - also known as a Portland Course Plotter - which features an adjustable rose. 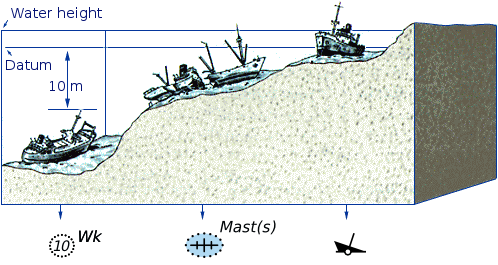