In China compasses have been in use since the Han dynasty (2nd century BCE to 2nd century CE) when they were referred to as “south-pointers”. However at first these magnets were only used for geomancy much like in the art of Feng Shui.

Eventually, during the Sung dynasty (1000 CE) many trading ships were then able to sail as far as Saudi Arabia using compasses for marine navigation. Between 1405 and 1433, Emperor Chu Ti's Treasure Fleet of the Dragon Throne ruled the entire South Pacific and the Indian Ocean, a territory that ranges from Korea and Japan to the Eastern coast of Africa.

At this time Western mariners were still rather ignorant of the navigational use of the magnet. Petrus Perigrinus van Maricourt

wrote a first treatise on the magnet itself: “De Magnete” (1269). And though its nautical use was already mentioned in 1187 by the English monk Alexander Neckham, the use onboard only came about around the 13th and 14th century in the Mediterranean Sea.

when the Dutch destroyed the Spanish fleet near Gibraltar in 1607. The drawback was of course Van Heemskerk's own death during this victory.

In the fin-de-siècle of the sixteenth century mariners believed that the magnetic north pole coincided with the geographic north pole. Any suggestion otherwise had been denied by Pedro de Medina. 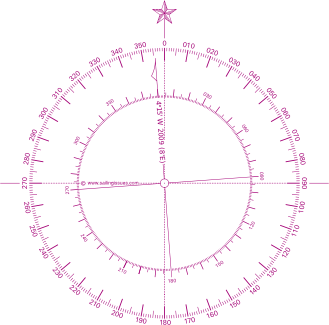 Magnetic observations made by explorers in subsequent decades showed however that these suggestions were true. But it took until the early nineteenth century, to pinpoint the magnetic north pole somewhere in Arctic Canada (78° N , 104° W). From then on the angle between the true North and the Magnetic North could be precisely corrected for. This correction angle is called magnetic variation or declination.

The correction for magnetic variation for your location is shown on the nearest! nautical chart's compass rose. In this example we find a variation of 4° 15' W in 2009, with an indicated annual correction of 0° 08' E. Hence, in 2011 this variation is estimated to be 3° 59', almost 4° West. This means that if we sail 90° on the chart (the true course), the compass would read 94°. 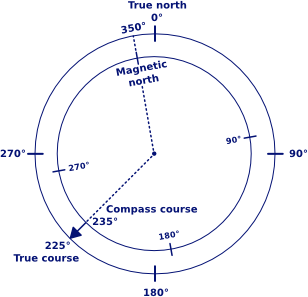 These overlayed compass roses show the difference between true north and magnetic north when the magnetic variation is 10° West.

From the image we find: tc = cc + var
in which “cc” and “tc” stand for “compass course” and “true course”, respectively.

To convert a true course into a compass course we need first assign a “-” to a Western and a “+” to a Eastern variation. Note that this makes sense! because of the clockwise direction of the compass rose. Here, the inner circle is turned 10° anticlockwise, hence -10°

Magnetic deviation is the second correctable error. The deviation error is caused by magnetic forces within your particular boat. Pieces of metal, such as an engine or an anchor, can cause magnetic forces. And also stereo and other electric equipment or wiring, if too close to the compass, introduce errors in compass heading.

Furthermore, the deviation changes with the ship's heading, resulting in a deviation table as shown below. The vertical axis states the correction in degrees West or East, where East is again positive.

The horizontal axis states the ship's heading in degrees divided by ten. Thus, when you sail a compass course of 220°, the deviation is 4° W. (Note, that on most modern sailing yachts the deviation is usually not larger than 3°).

When a compass is newly installed it often shows larger deviations than this and needs compensation by carefully placing small magnets around the compass. It is the remaining error that is shown in your deviation table.
You can check your table every now and then by placing your boat in the line of a pair of leading lights and turning her 360 degrees.

Correcting for both deviation and variation

Converting a compass course into a true course, we can still use our equation but we need to add the correction for deviation:
cc + var + dev = tc


Converting a true course into a compass course is a little less straight forward, but it is still done with the same equation.

© sailingissues.com
The magnetic course (mc) is the heading after magnetic variation has been considered, but without compensation for magnetic deviation. This means that we are dealing with the rewritten equation from above:
tc - var = cc + dev = mc.

Note, that the actual course lines the navigator draws in the chart are always true courses! These can subsequently be labeled with the true course or the corresponding magnetic or compass course if appropriate. In the next chapter we will be plotting courses in the chart.